Liz Rolfs and Bill Peach sailed to the Caribbean and cruised the East Coast of the USA before returning to the Solent for their next adventure, building their new home. Liz and Bill purchased Brackenhurst in the New Forest, a splendid spot close to Lymington with an existing bland house set in 10 acres of meadow, paddock and woodland. 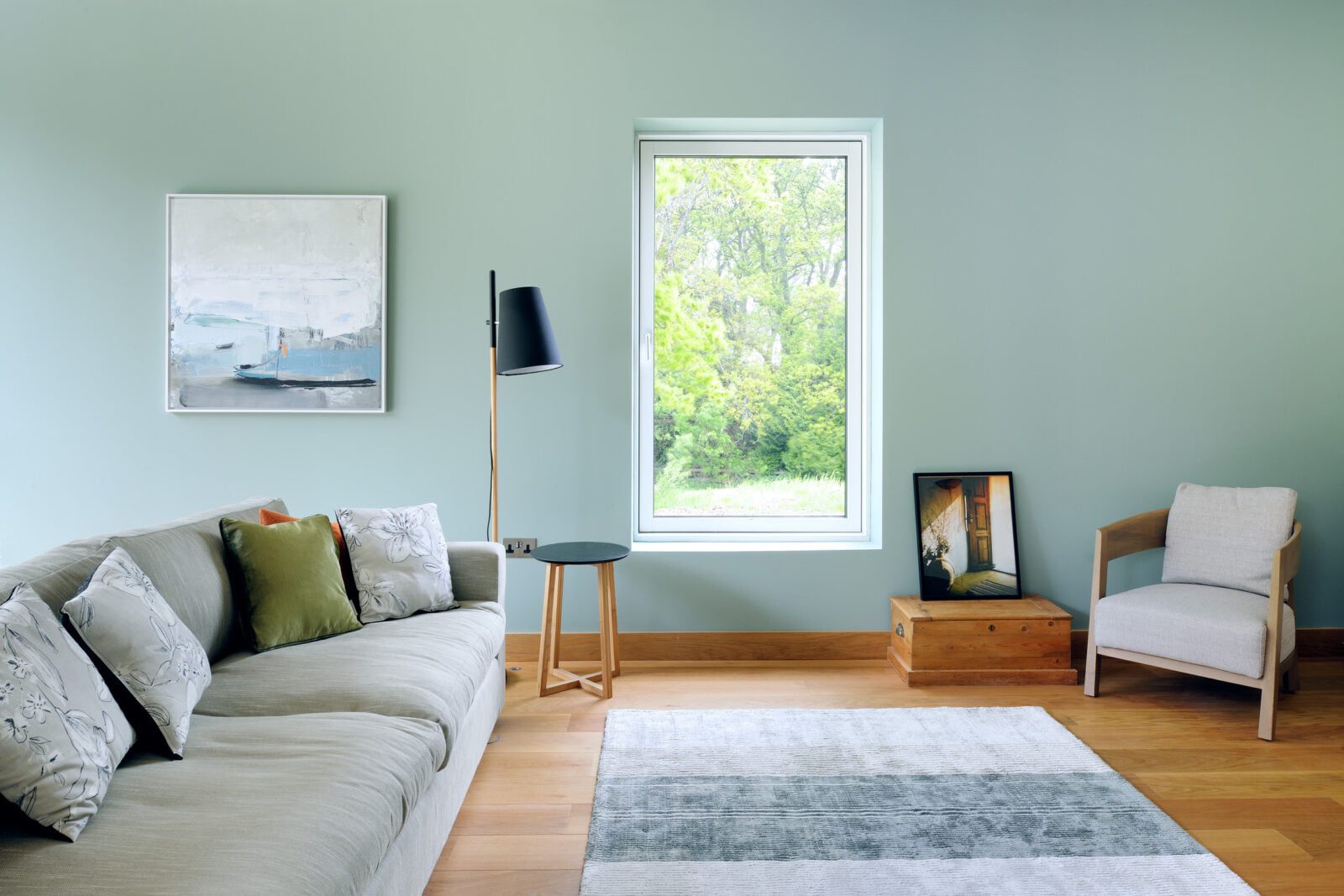 Having selected PAD studio as the architect who would breathe on the house, it was decided that remodelling wasn’t going to do it, more drastic measures were needed and that a new house would be a better solution. Having used eco solutions in their Victorian London house, Liz and Bill were ecologically minded at the outset. This has been reinforced by their blue water cruising where the seasons mean so much more and where the importance of looking after the environment and using only what you need are prime. 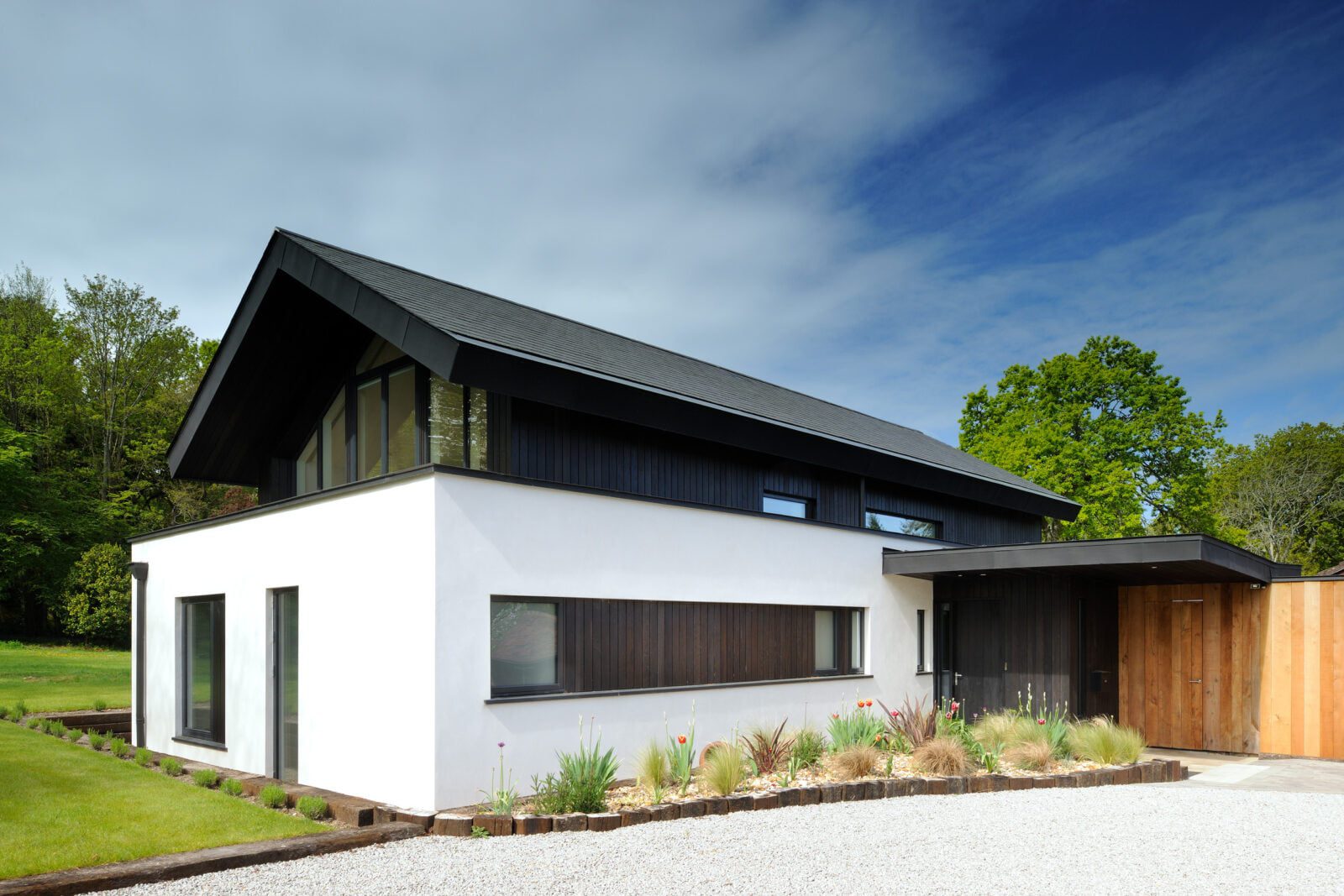 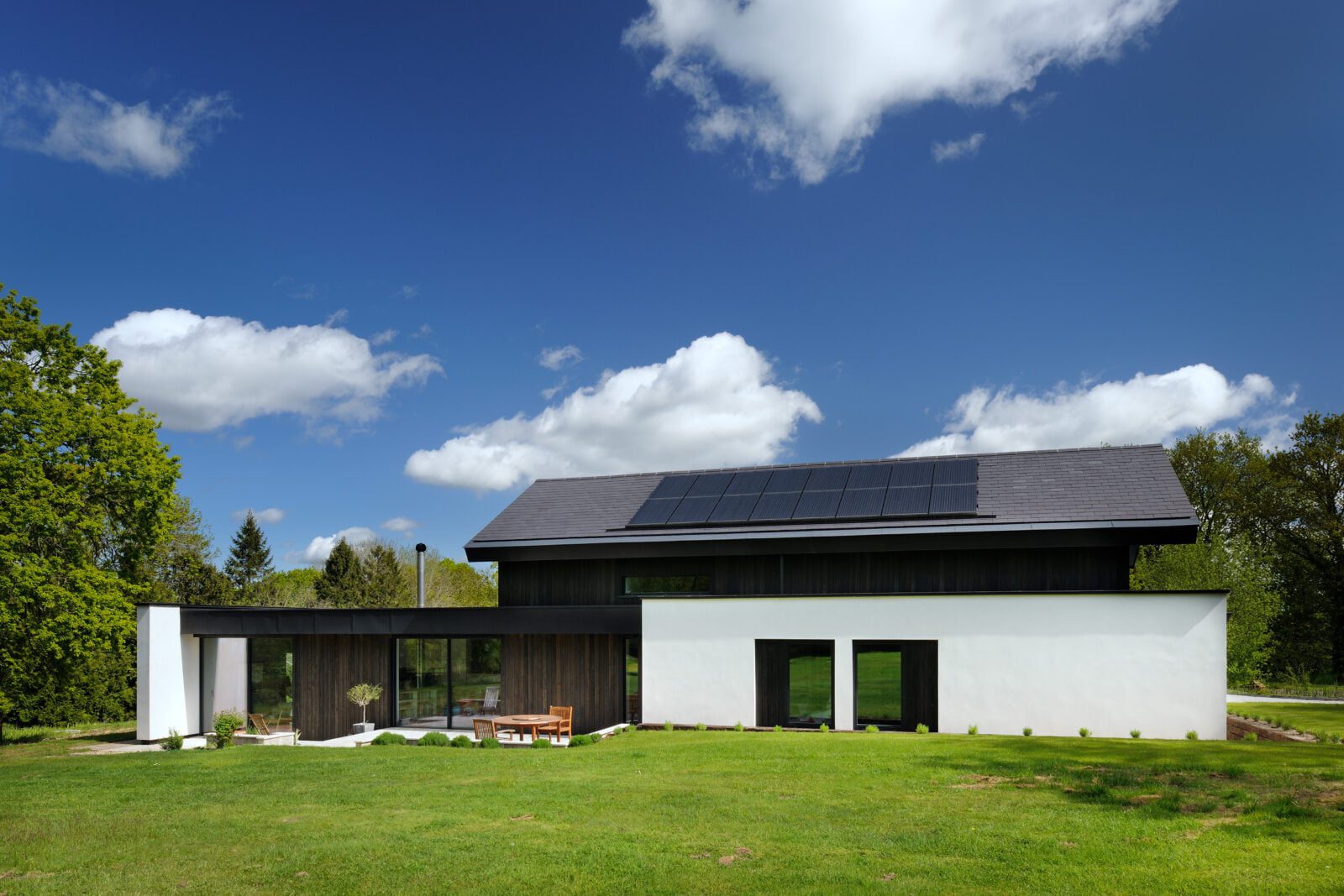 For them eco living is about actively engaging with the eco lifestyle and always thinking and planning to make the minimum impact possible on the environment. Part of this means that materials are sourced locally whenever possible. An eco-house is not something that you can order and have delivered to you – you have to have a close involvement in the process. During the build, both of them were involved in every stage of the process, living on site. 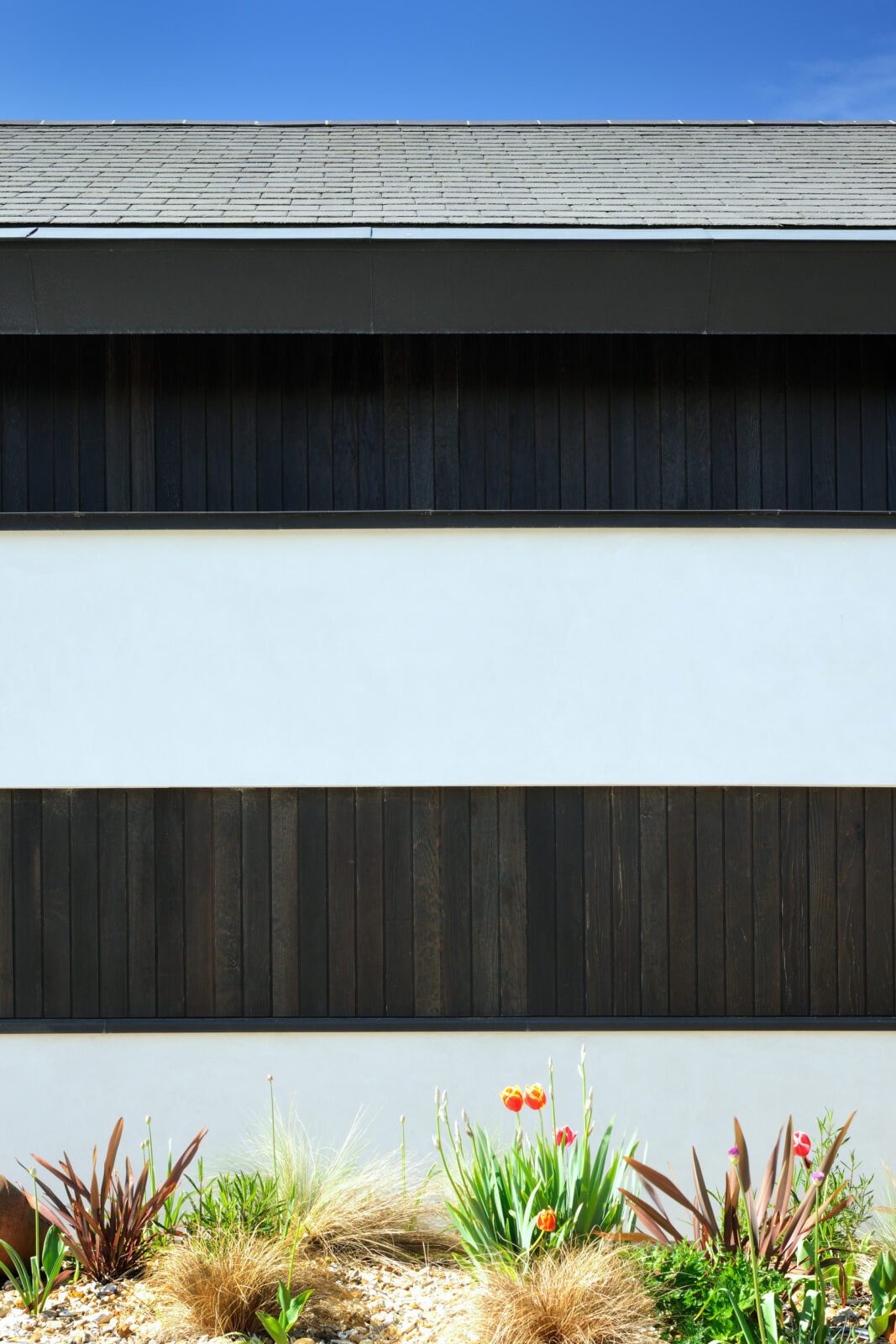 Once the old house had disappeared, the inevitable caravan turned up which became home for longer than planned. This was home and site office with Liz dealing with all the administration including the paperwork to get the project to Code 5, and the Brackenhurst blog, whilst Bill donned wellies and hard hat, learned to drive a digger and turned labourer. The builders were carefully selected as people who were local, excited about the project and willing to cope with hands on clients who would build the house with them. A tall order, but on the whole one which worked out just fine. 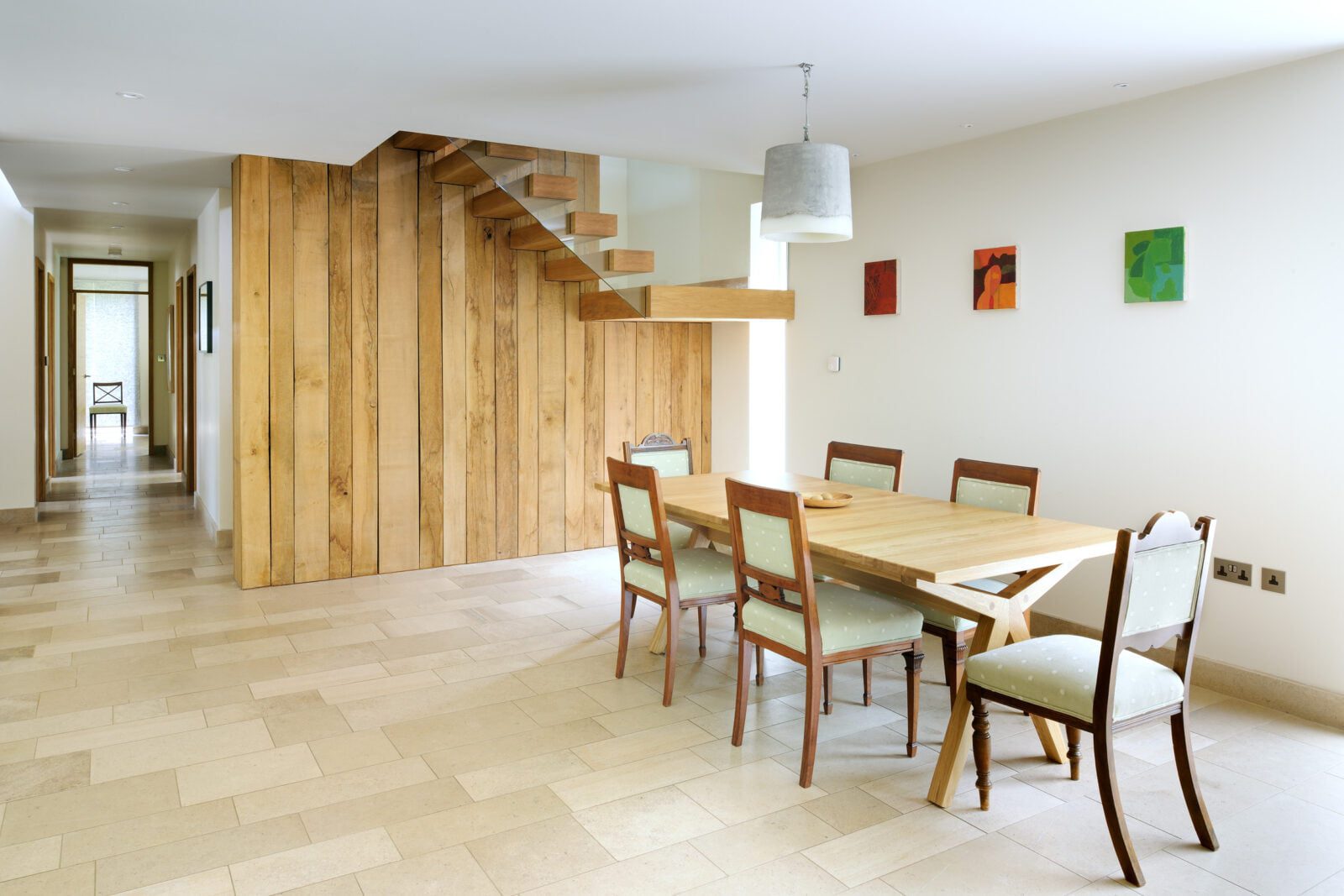 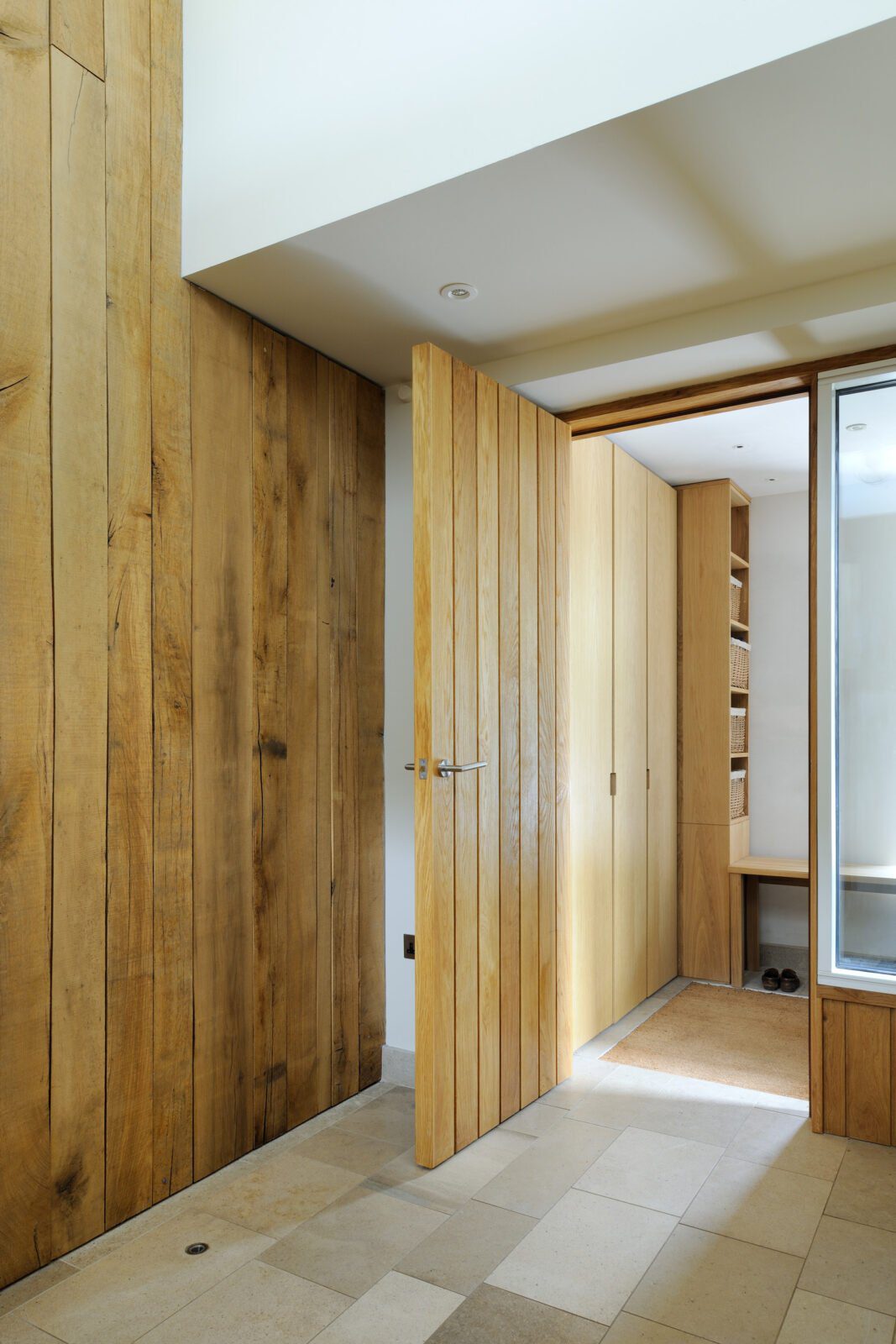 We are mindful of our responsibility and our impact on nature. Not merely the sites we work with but also the wider environment by the consideration of a building’s lifecycle. We believe that sustainability is complex and don’t believe that you should just rely on bolt on technology, it should be considered from the outset. We do this automatically in the way we approach design. 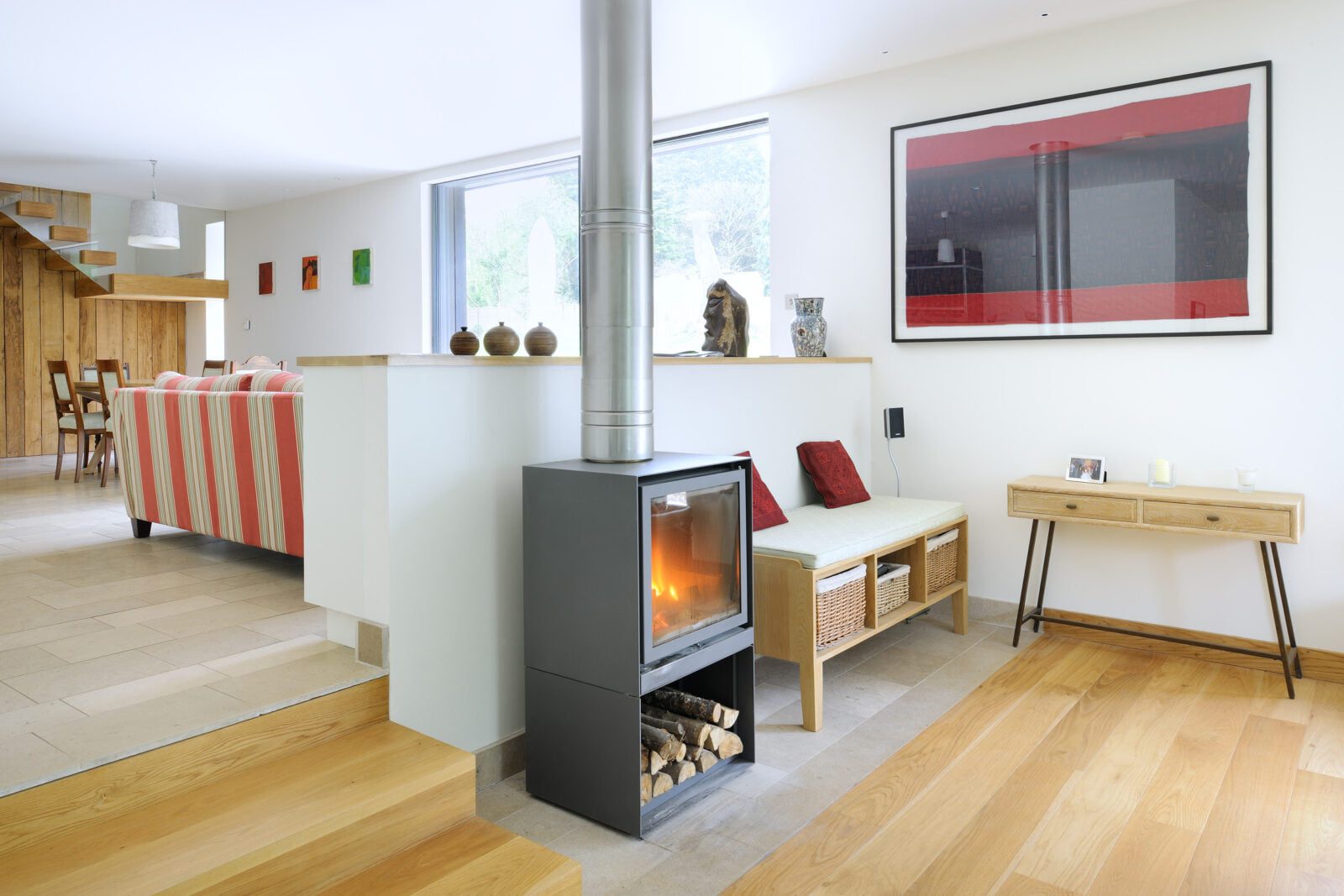 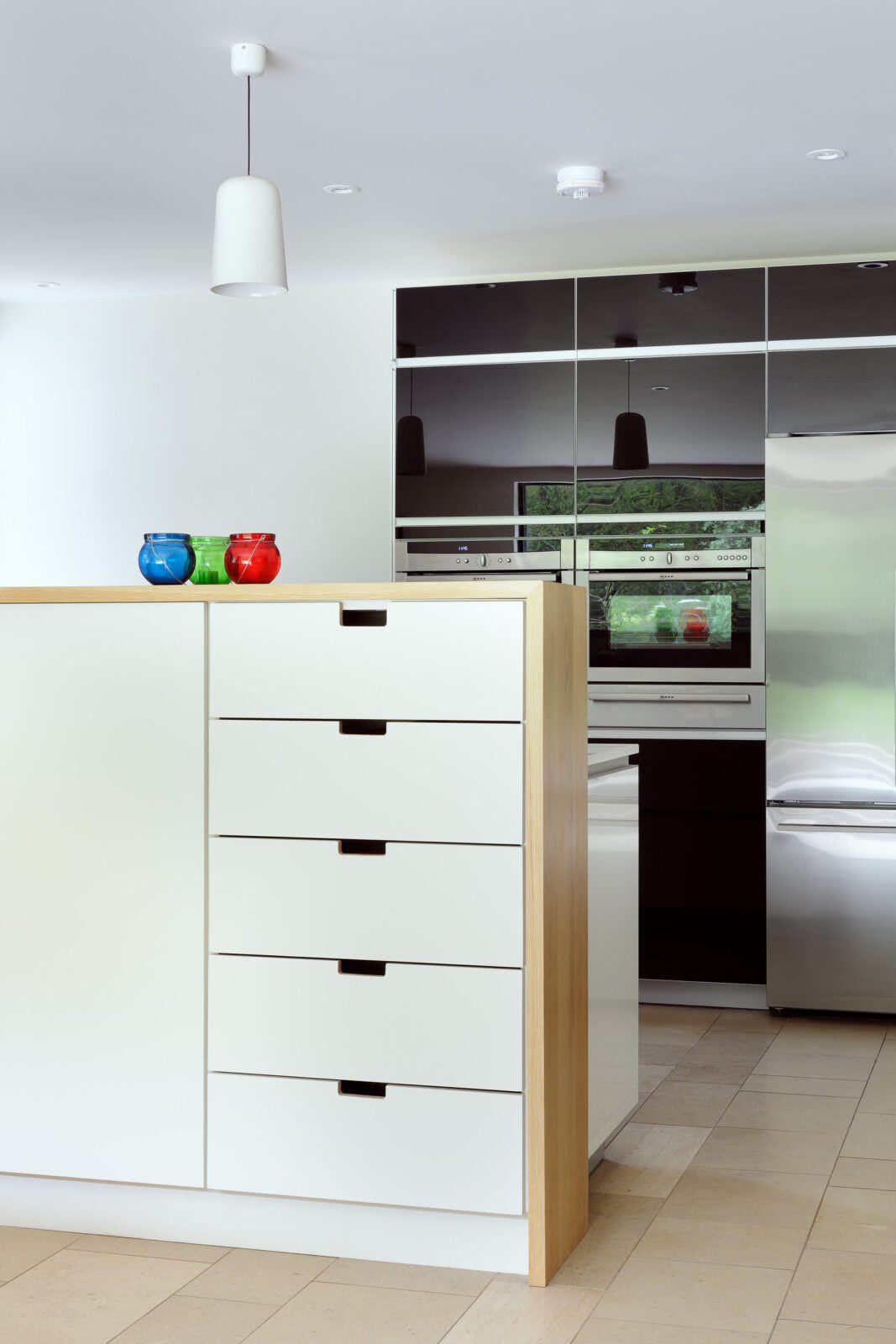 Liz and Bill, who kept an online blog of the construction process throughout the build required a lifetime home which demanded little or no energy to run and could be capable of being removed completely from the grid, if required. They also wished for the house to draw on the local vernacular of the surrounding barns and farm buildings, and for the house to be modest in size and rooted firmly in its location and site. The timber frame house is heavily insulated with recycled newspaper, has triple glazed windows and is incredibly air-tight. The house is heated using local wood (biomass) and the wastewater is fed to a grey water reed bed for filtering. Rainwater is captured in underground tanks which are used to water the abundant vegetable plot. 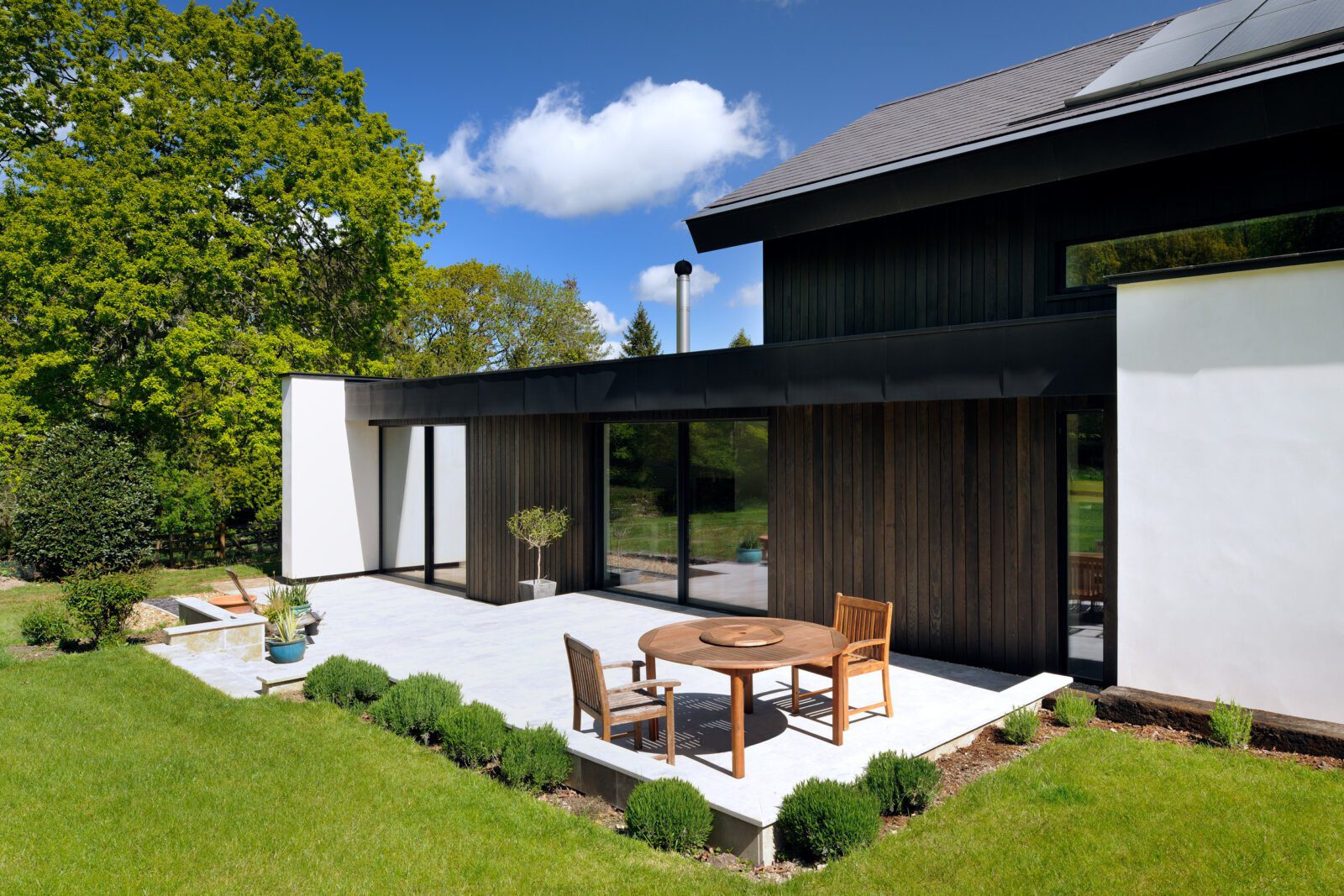 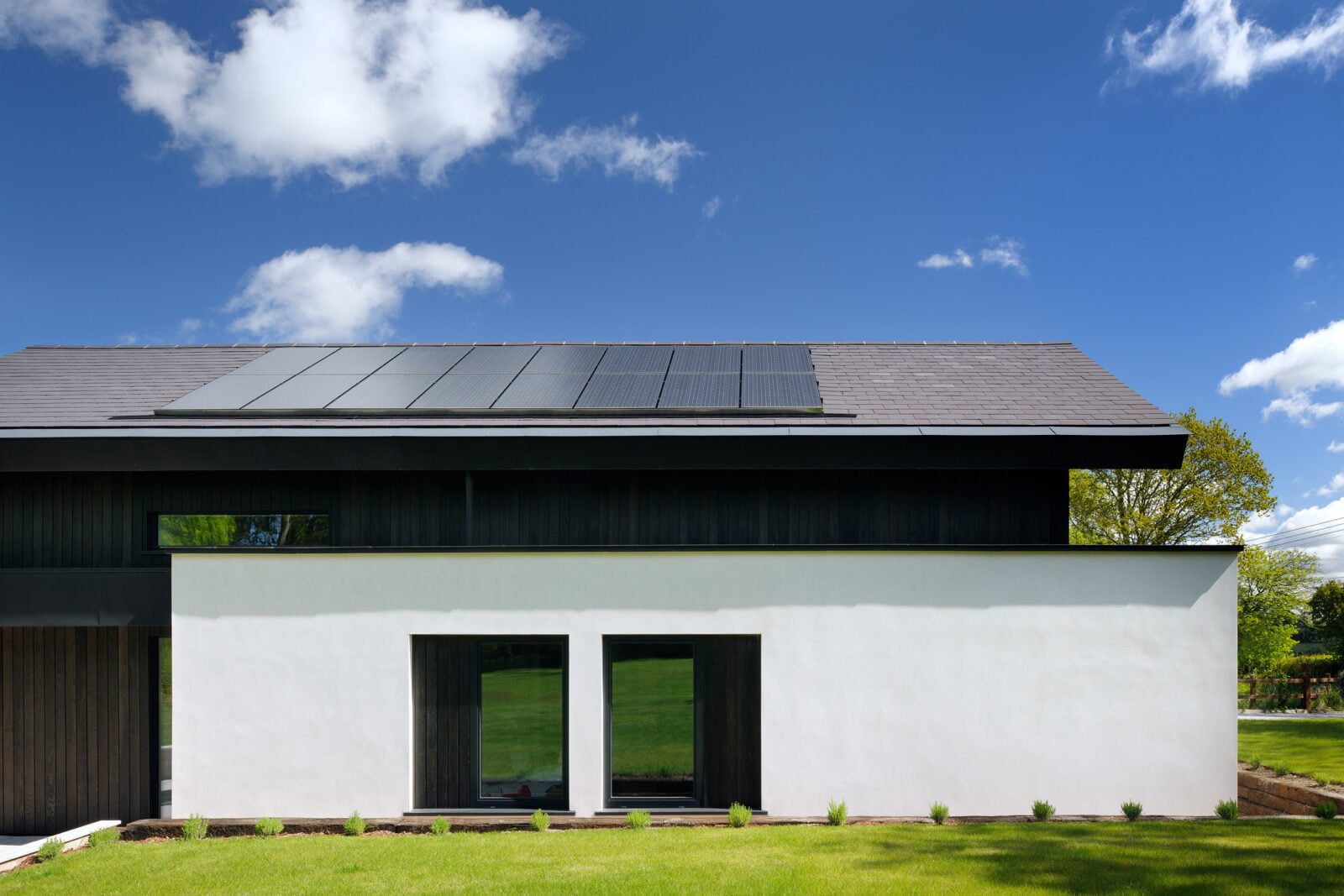 “To have such a close involvement in the design and build of such an extraordinary 21st century house that can be part of the environment rather than just plonked in it has been the best part.”

For anyone thinking about building an eco-house, Liz and Bill’s advice would be to feel comfortable with the architect and tradesman that you choose. They will make or break the project. You should always do your own research and don’t expect the experts to know all the answers as the game is constantly changing. You will only get the best out eco technology if you are totally engaged and prepared to learn about what is available and how it can be applied to your project effectively.